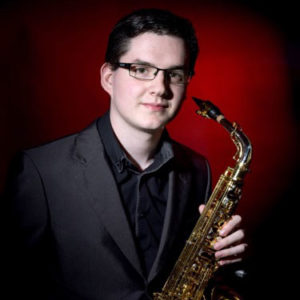 Robert Finegan is a young saxophonist based in the North-East region of Ireland who has performed all over the island of Ireland and Europe. In 2019, he completed the BA in Music Performance in DIT Conservatory of Music achieving a first class honours and is currently studying for a Masters of Music Performance in the Royal College of Music, London.

In 2013 Robert was awarded a scholarship from St. Peter’s Male Voice Choir to study at DIT Conservatory of Music where he was a recipient of the School of Excellence Award and went on to win the Macardle Young Classical Musician Award in 2014. In 2017, Robert was awarded 2nd prize in the Irish Freemasons Young Musician of the Year and was also the inaugural winner of the Flax Trust Music Award. Other awards include the 2019 Sligo Feis Ceol RTE Lyric FM Instrumental Bursary, multiple awards in the ESB Feis Ceol and also the Midlands Feis Ceol Senior Repertoire.

In summer 2018 Robert represented Ireland at the World Saxophone Congress in Zagreb, Croatia playing music by contemporary Irish composers including a world premiere of Ian Wilson’s Between Stone and Sun. Robert also made his recital debut in Germany where he performed at the Bad Homburg International Saxophone Masterclass.

In 2018 Robert became the first saxophonist to become a Yanagisawa saxophone and Vandoren reed endorsee from the Republic of Ireland.