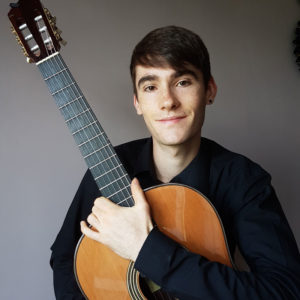 Murrough Connolly is an award-winning classical guitarist from Tralee who recently completed a BMus degree with First Class Honours at CIT Cork School of Music. He is currently undertaking an MMus at the University of Manchester, receiving tuition from world-renowned guitarist Craig Ogden.

A traumatic wrist injury in October 2017 resulted in a hiatus from guitar playing for more than a year. During this time, Murrough turned his attention to composing and his composition “Cataract” was performed by the Irish Guitar Quartet in the National Concert Hall in May 2018. Following his studies, Murrough hopes to pursue a career as a performer and composer.