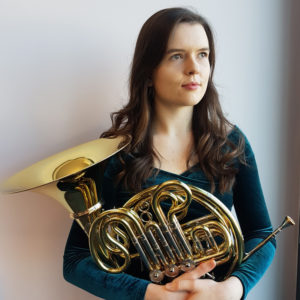 Irish hornist Louise Sullivan grew up on the Beara Peninsula in County Kerry and has just completed her BMus degree at the CIT Cork School of Music, graduating with First Class Honours. During her time in CIT, she studied with Seán Clinch and Maestro Luca Benucci at the Scuola Di Musica Di Fiesole while on Erasmus in Florence, Italy.

Louise is an award-winning musician and bursary recipient. She participated in the Camerata Ireland Clandeboye Academy in August 2017, where she was awarded the Flax Trust Bursary. In April 2018, Louise won first prize at the Concorso Internazionale Musicale “Città di Pesaro”, and in June 2018 she reached the final round in the Internazionale Concorso “Audi Mozart” competition in Rovereto Italy. She has also won many prizes in Feis Ceoil Dublin and Feis Maitiú Cork. Louise was selected to perform for the University of Limerick Concert Hall Rising Stars of 2019 celebration last April.

As a keen orchestral player, Louise has been a member of the National Youth Orchestra of Ireland, Ulster Youth Orchestra, Irish Youth Wind Ensemble and SinfoNua. She has taken part in a MusXchange with the National Youth Symphony Orchestra of Scotland playing at the BBC Proms in the Royal Albert Hall London. Louise was invited to play with the Irish Chamber Orchestra and the Vanbrugh Quartet. For the 2018/19 season, she was a successful participant in the RTÉ National Symphony Orchestra mentoring scheme and the Ulster Orchestra Professional Experience Scheme. She has also been awarded a place with the European Union Youth Wind Ensemble.

Louise has performed in masterclasses with many well-known horn players such as Stefan Dohr, Radovan Vlatković and Dale Clevenger.

This coming September 2019, Louise will begin her studies for a Masters of Music Performance at the Royal College of Music, London.