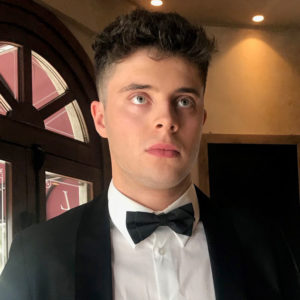 JJ McNamara is a young County Meath virtuoso pianist. Although only 20, he has already performed as soloist with international orchestras and won several major national competitions most notably the ESB Feis Ceoil Concerto Competition (with dad Frank on 2nd piano) and multiple first prizes in the Sligo Feis, Piano Academy of Ireland Festival, Arklow Feis and Newpark music festivals. He was the youngest pianist in the ESB Feis Ceoil Mabel Swainson Comp in 2016 and was specially commended for a brilliant interpretation of Beethoven and a bravura performance of Faust Waltz by Liszt. Also in 2016, JJ was a winner in his first international piano competition, when awarded the World Piano Teachers special prize at the Junior Chopin International Competition in Poland.

In April 2017 JJ was awarded the Betty Clarke medal for his repertoire performance at the ESB Feis Ceoil and performed at the prizewinners’ gala concert at the National Concert Hall to huge acclaim with Ireland’s beloved broadcaster Gay Byrne describing the performance as stunning!! That same month he was a finalist and prizewinner in the International Spanish Piano Competition, Xabia Concurso. In 2017 JJ was one of only 6 Irish pianists chosen to take part in the 2018 Dublin International Piano Competition and on Dec 13th he was honoured to be invited to play Tchaikovsky Piano concerto No 1 in Bb minor with the Orlando Chamber Orchestra at the Electric Ireland Big Christmas Concert. In 2018 he was awarded a scholarship by Dr Ite O’Donovan and the Dublin Choral Foundation which enabled him to take part in the prestigious Euregio International Competition in Germany, where J.J. was awarded a special prize which included a televised performance for a special audience for which J.J. was given a rave review in a major German National newspaper. At home in Ireland, he was delighted to win the audience choice award at the Trench Awards in the 2018 Birr Music Festival. In 2019 JJ won the Mabel Swainson Cup at the Feis Ceoil and was successful in winning the Teissier Bursary at the RIAM. As a result of winning Mabel Swainson Cup, JJ performed a lunchtime concert on August 29th at Clandeboye Festival and will make his solo National Concert Hall Debut on Oct 30th.

JJ has studied with Padhraic O Cuinneagain, Jonathan Middleton, Martin Roscoe and currently he is studying with Hugh Tinney at the Royal Irish Academy of Music in Dublin. JJ took part in several masterclasses in Ireland and abroad, where he studied with Barry Douglas, John O’Conor, Pavel Nersessian, Herbert Koch, Evelyn Brancart and Orla McDonagh. Born into a very musical family JJ began his piano studies at the age of

Aged 11, he toured Ireland with his parents and siblings on the McNamara family tour playing 13 venues in which he performed some Beethoven and Chopin. In 2011 at the age of 12 in the Newpark Music Festival JJ received the highest ever mark of 97 in the Concerto Cup and was the youngest ever winner of the award for his performance of Grieg’s Piano Concerto (1st movt).

On April 2nd 2015 JJ performed the Hungarian Rhapsody No. 2 live on the John Murray Show RTE Radio 1 and in 2016, JJ was hailed as “one to watch” as a musician of the future by the Sunday Independent