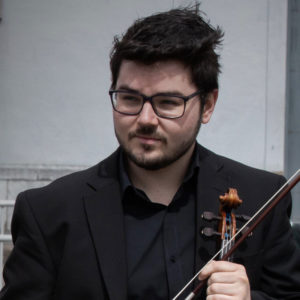 David McElroy graduated in 2017 with a First Class Honours BMus from CIT Cork School of Music with the title “Student of the Year” awarded as the highest placed fourth year student and also taking the Alan Cutts prize for conducting. He is continuing his violin studies with Greg Ellis in the CIT Cork School of Music Master of Arts in Performance programme and is currently in his final year.

David performed in the RDS Rising Stars platform in May 2017 & April 2018. Twice winner of the senior concerto prize, David has performed Bruch Violin Concerto No.1 as well as Glazunov Violin Concerto with CIT Cork School of Music Symphony Orchestra. David was also leader of the orchestra for 2 years. He has won both the CIT Cork School of Music and Feis Ceoil Chamber Music Competitions as well as performing in the National Concert Hall Feis Ceoil Gala Concert as first violin with the Doolan Quartet. In 2018, the Doolan Quartet were given a masterclass by the award winning Emerson Quartet.

David has performed for masterclasses in Italy, the UK, Romania, France and Ireland. He also studied with Fernand Iaicu at the École Supérieure Musique in Lille while on Erasmus.