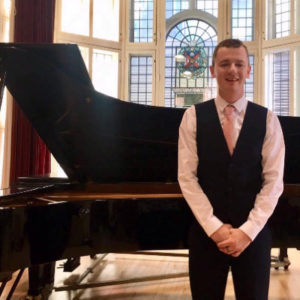 Connor McQuillan has completed a Bachelor of Music Degree at Queen’s University Belfast. He received a first class score in his end of year recital and enjoys playing a range of repertoire, particularly Classical period piano sonatas. He has received ATCL and DipLCM diplomas for clarinet and piano respectively as well as winning a Trinity College London Silver Medal for his grade 8 piano which he achieved with distinction. Connor won a total of 13 festival classes over 6 years at Ballymena Music Festival in both age group and open categories as well as twice being a finalist in the Beggs and Partners Young Instrumentalist of the Year in both piano and clarinet respectively. He has played for both Ballymena Chamber Orchestra and Queens University Symphony Orchestra and has been involved in several musical theatre pit bands. This year Connor began to develop an interest and subsequently decided to pursue Musical Director roles in the theatre. He has been involved in productions such as ‘Rent’, ‘Little Shop of Horrors’ and the junior production of ‘Hairspray’. Outside of his performance and theatre endeavours, Connor enjoys teaching music in his home town of Ballymena as well as accompanying examinations for a range of Music Boards. Connor aims to pursue performance and work in Musical theatre further in his career and work in Chicago or Milwuakee full time.