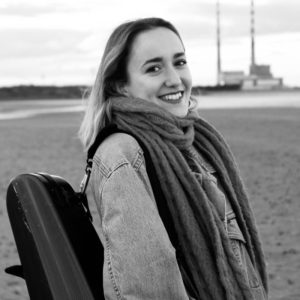 Claire Austen, aged 22, was 5 when she began her violin studies at the Young European Strings School of Music in Dublin, Ireland. She received her BA in Music Performance at the Royal Irish Academy of Music in June 2019 under the tutelage of Fionnuala Hunt, having received her Diploma in Music teaching and Performance with Distinction in June 2016. Claire has performed extensively as a soloist from a young age. She made her first solo appearance, aged 10 at the National Concert Hall Dublin, featuring Vivaldi’s Concerto for Three Violins in F Major and in 2009 she was chosen to perform at the ABRSM 120th Anniversary Concert in Cadogan Hall, London. Claire was selected to play at the Feis Ceoil Prize Winners Concert at the NCH in 2014. In 2016 Claire made her solo debut in Carnegie Hall, New York playing Bruch violin concerto. In 2017 she was awarded Most Promising Musician at the Freemason’s Young Musician of the Year competition. In March 2018, she featured as a soloist at the Trinity Orchestra Hilary Term Concert performing Bruch Violin Concerto No.1 in G minor. In May 2019 Claire made her solo debut with the RTE National Symphony Orchestra playing Glazunov Violin Concerto in A minor.

Claire’s ensemble work includes performances and recordings with the Young European Strings Chamber orchestra at venues throughout Europe. She performed at the renowned West Cork Chamber Music Festival 2018 as a member of the Beckett quartet and with the Docklands Quartet in 2019. She recently performed Mendelssohn and Enescu Octects alongside internationally acclaimed artists Daniel Rowland, Maja Bogdanovic and esteemed members of the RIAM faculty.

Claire was a member of the National Youth Orchestra of Ireland for many years and served as its co-leader for two years. She is the former leader of the RIAM Symphonia. Claire has had the privilege of having Master Classes with leading artists including: Maxim Vengerov, the Emerson Quartet, Jan Repko and Daniel Rowland. In 2018 she spent several months in Vienna studying at the University for Music and Performing Arts with Prof. Ernst Kovacic. Claire began her masters in Performance Science at the Royal College of Music London in September 2019.