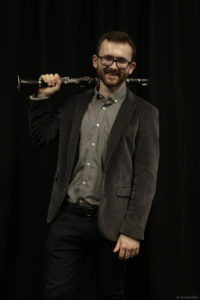 From a young age Cathal has been interested in the community spirit of orchestral and chamber ensemble playing, and as such has been a member of the National Youth Orchestra of Ireland, Dublin Youth Symphony Orchestra, Royal Irish Academy of Music Symphony Orchestra, Trinity Orchestra, Irish Youth Wind Ensemble and Royal Conservatoire of Scotland Symphony Orchestra. More recently Cathal auditioned for competitive internships and was subsequently invited to play with the Scottish Chamber Orchestra, Scottish Opera Orchestra, BBC Scottish Symphony Orchestra and Royal Scottish National Orchestra. Cathal also plays with the Knokkos Trio and this year the trio were the winners of the Dunbar-Gerber award for chamber music for their interpretation of the Brahms Trio in A Minor, Op 114. Additionally, he was awarded a scholarship to attend the 2018 Henri Selmer Paris Summer Academy, where he studied with Alessandro Carbonare, Michael Lowenstern and Guy Yehuda.

Cathal has performed in many venues around the globe including Dublin, Liverpool, Glasgow, Edinburgh, Madrid, Berlin, Prague, Budapest, Austria, Miami and Michigan. He is delighted to be invited to perform in the prestigious Irish Freemasons’ Young Musician of the Year competition.