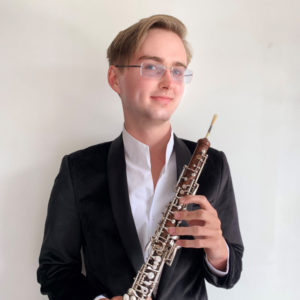 Irish oboist Ben Gannon made his solo debut playing the Marcello oboe concerto with the New York Concerti Sinfonietta in Carnegie Hall in May 2017. Ben is currently pursuing his BA in Music Performance at the Royal Irish Academy of Music (RIAM) studying with Ruby Ashley.

Ben has received many awards, including the Birr Lions Club bursary at the Trench awards 2018. He won the Senior Woodwind competition at Feis Ceoil 2018. He was subsequently invited to perform as a soloist at the John Field Room in the Young Platform Series. In the 2018 Sligo Feis Ceoil, Ben was awarded the Crichton Cup and was a finalist in RTE lyric FM Bursary award. In 2019, Ben was a finalist in the Maura Dowdall concerto competition at the RIAM.

As a devoted orchestral music Ben was a former member of the National Youth Orchestra of Ireland. From September 2018 to may 2019 Ben was selected to take part in the Ulster Orchestra’s Professional Experience Scheme, sponsored by Andrew Lloyd Webber. He performed throughout the year with the orchestra as a principal player in Ulster Hall and Guildhall Derry, conducted by Rafael Payare. He was also selected to partake in the RTE National Symphony Orchestra’s mentor scheme for 2019. Recent performances include Elgar’s Enigma variations conducted by Leonard Slatkin. Ben has performed in many prominent venues in Ireland and abroad, including Carnegie Hall, New York, Ulster Hall, Belfast, RDS Concert Hall and the National Concert Hall, Dublin. Recent festival appearances include the Birr Festival of Music and voice performing two recitals as a guest performer.